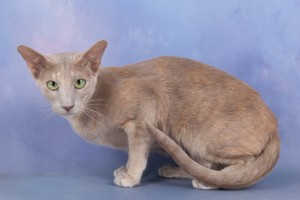 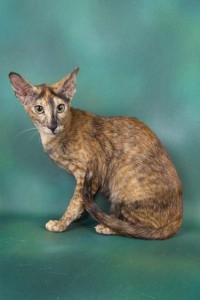 Though they are genetically mosaics, the description of Tortoiseshell or Tortie cats as “having bits and pieces of colour here and there” is far more apt, albeit not very technical! The colour distribution in Torties may be ‘patched’ or ‘mingled’. In the early days judges looked for patches of colour in Black Torties, yet looked for mingled colour in the Blue Cream! Because the colour distribution is random Torties simply cannot be bred to order; and so the breeding of Torties is very much a ‘lucky dip’ you have to take what you are given!

Torties are recognised in Black, Blue, Chocolate and Cinnamon, where the other two colours present in the coat will be red and cream; the Lilac and Fawn torties where the other colour will be cream; and finally the Caramel tortie which will also have apricot hairs. It is important that all relevant colours are present in the coat, and that there is a fairly even distribution of colour. There is no rule as to what the perfect balance of colours is, and at the outer edges it becomes purely personal choice! However in the Oriental Tortie large patches of colour are undesirable because the red and/or cream / apricot will invariably show very heavy tabby pattern. Equally it is not desirable there is so little red/cream/apricot that you cannot immediately tell a cat is a Tortie and end up looking for mottled pads or odd red hairs!!

There is a vast difference between Torties, which show heavy tabby markings in the red and cream areas, and Tortie Tabbies. In the non-agouti Tortoiseshell cat any tabby pattern will only be apparent in the red, cream or apricot areas. So for example in the case of a Black Tortie tabby markings may be visible in the red and cream areas, BUT there will never be tabby pattern in the black areas. However in the Tortie Tabby the pattern of spots should be visible over the entire cat and the spots should be, to a greater or lesser degree, of mixed black, red and cream colour. Unlike the non-agouti the Tortie Tabby (also known as Torbies) will show pattern in the non-red areas.

The Oriental Smoke is recognised in all colours accepted in the Oriental Shorthair. The Breed Standard states that there should be ‘a near white undercoat, which should be approximately one-third to two-thirds of the total hair length in adults’. This is quite a considerable range, and certainly exceeds that accepted in other breeds. In the Asian Smoke for example the requirement is that the undercoat ‘be no less than one-third, and no more than one-half of the total length of hair in adults.’ In the Smoke Long Hair the top two-thirds should be ‘of deepest intensity of the appropriate colour’ with ‘the bottom one-third of the hair as light as possible’.

The Oriental Smoke therefore differs slightly from other breeds where the Smoke is a cat of contrast, and a Black Smoke should look like a Black cat until the coat is ruffled to show a white undercoat. Of course this is quite acceptable in the Oriental Smoke, but the Breed Standard also allows for the white undercoat to show through with the result that ‘faint ghost tabby markings may be evident on the body’. The Standard does state that ‘distinct tabby markings in adults are undesirable’ but they are not a withholding fault – in other breeds this would not be acceptable.

One common failing in Silvers is that they frequently show yellowing especially to the face and legs. This is often referred to as ‘tarnishing’ or being ‘brassy’, and clearly detracts from the bright sparkling effect one is looking for in a Silver. This ‘tarnishing’ is caused by polygenes which enhance the richness of colour in standard varieties and is usually referred to as ‘Rufism’. In Silvers rufism is selected against, and so again there will be a reduction in the ‘warmth’ of the pattern colour. An offshoot of this is that standard coloured cats bred from Silvers frequently also lack warmth and richness of colour. 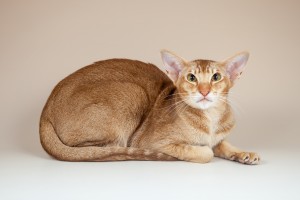 The entire body coat consists of ticked or agouti hairs, and the tabby barring appears only on the head, legs, and tail. The body fur itself is true agouti, consisting solely of evenly banded hairs. The Standard states “The coat should be evenly ticked with pattern colour, with double, or preferably treble, ticking, i.e. two or three bands of each colour on each hair”, but in reality in the very short Oriental hair evenness of ticking is more important than the number of bands.

The Breed Standard recognizes the character of the Ticked gene, and accepts that a fully ringed tail is not a realistic requirement in the Ticked Tabby, and also accepts that “there may be a necklace(s), broken or unbroken”, in other words it does not matter whether it is completely joined or not.

The Ticked Tabby is a peculiar variety in that it has two forms depending on the genotype. Because the Ticked gene Ta is incompletely dominant to the other alleles in the series the heterozygous form Ta _ shows a greater degree of head, leg and tail markings than the homozygous form Ta Ta which has a remarkable absence of barring on the limbs, both having an evenly ticked body.

When the Oriental Ticked Tabby was recognised the partial tabby markings of the heterozygote were seen as desirable, and so leg barring, tail markings, necklaces and facial markings were demanded by the Breed Standard. The Breed Standard was subsequently amended to allow for the homozygote that need have no leg markings, no tail rings other than a solid tail tip, and minimal markings to the face or neck.

The Spotted Tabby in the very best form is a cat of outstanding beauty. The pattern should consist of spots of solid colour on an agouti background. The spots may vary in size, but ideally should be round in shape; elongated spots resembling broken bars are not acceptable. The spine line must be broken into spots and a solid spine line in an adult is severely penalised. In many Spotties three lines of spots are seen along the spine. The majority of Spotted Tabbies have barred legs, but occasionally one with spotted legs is seen, either of course is acceptable. The leg markings should extend as far down to the feet as possible. The tail must have a solid coloured tip, and should have solid coloured rings along its entire length.

Feral and domestic cats of Mackerel pattern certainly exist, but they usually have white feet and bibs to boot! It is questionable whether the Spotted Tabby is a Mackerel with broken bars, or is a Mackerel Tabby a Spotted with narrow linked spots? In the Oriental the Mackerel Tabby though it has championship status really may not exist! The Breed Standard however asks for narrow unbroken lines running vertically down the body from the spine line, and asks that “these lines should be as narrow and numerous as possible”. 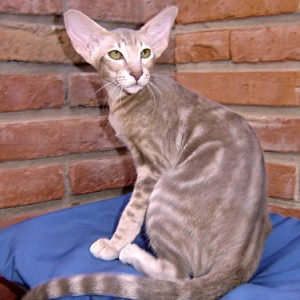 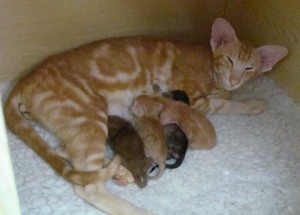 The Classic Pattern gene has existed in the domestic cat since the earliest of times. It was this pattern that cat breeders first accepted as being ‘Tabby’. Possibly because the pattern is that of the ordinary domestic moggy it has received limited attention from the majority of Oriental breeders. It is the most variable of the Tabby patterns, and is also visually the “heaviest”. The pattern consists of wide stripes and whorls covering about 50% of the body and there are larger areas of both agouti hair (ground colour) and solid pattern than in any other type of tabby. The pattern of the Classic Tabby is extremely variable, and though many Classic kittens may be produced many fail to reach the required pattern standard.

The markings of the Classic Tabby are very distinctive and because of this various parts have been named. On the shoulders is ‘the butterfly’, a series of markings that should be shaped like a butterfly, though because of the slender shoulders of the Oriental this may never be as well defined as in a British Shorthair.

The spine line, which runs from the butterfly to the tail, is broad and must be solid and unbroken; to each side and parallel with the spine line is another solid line which drops down onto the flanks. On either side of the body there must be a large solid ‘blotch’ or ‘oyster’ which is surrounded by one or more unbroken rings. The area between these markings is of ticked hairs, the pattern however must show no ticked or agouti hairs. It is very difficult to breed Classics that are totally symmetrical, but this must be the aim. 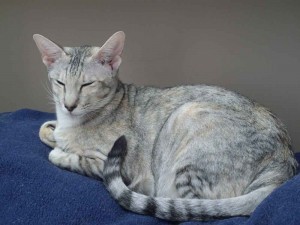 d is an agouti cat in which the tabby pattern colour is restricted to the ends of the hairs; this portion of the hair may vary from ‘tipping’ to medium-heavy shading, but must extend not to more than one half of the hair length on the sides of adults. Heavier shading may be apparent on the back. The vestigial, or surface, tabby pattern may be ticked, spotted, mackerel or classic, may show clearly on the surface of the coat in kittens, but should become less distinct as the lighter under-coat extends up the hair shaft with maturity. The under-coat should be free from ticking. In standard colours the undercoat should be pale, warm toffee coloured in black, chocolate and cinnamon shaded, cool toned beige in blue, lilac and caramel shaded, pale mushroom in fawn and near white in cream and apricot shaded. In silver shaded cats the under-coat should be as pale a silver as possible. Tarnishing – i.e. discolouration of the silver is undesirable. 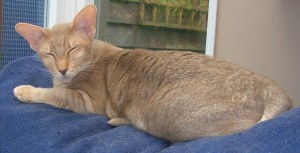